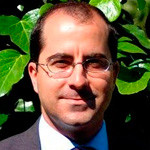 For more than fifteen years, he has been studying why some people (businesses) accomplish the goals they set themselves and others get stuck on the road. Alcaide has interviewed and conversed with the best, with hundreds of chief figures in the worlds of business, sports, fashion, science, finance, and personal development. He has also studied the works of the biggest specialists in management, like Brian Tracy, Anthony Robbins, Peter Drucker, Michael Porter, and Stephen Covey.

He has worked for businesses in numerous sectors (EY Spain, Remax, SHA Wellness Clinic, Euromaster, Energy System, Foro Empresarial de la Región de Murcia), and has been partner and director of Executive Excellence, which publishes an eponymous magazine that is a leader in the upper management field.

Alone or as a collaborator, he has published such books as Your Future is TODAY (Alienta 2014, fourth edition)—considered “the Google of personal development,” and Executive Coaching (Ariel, 2003), the first book by a Spanish author on coaching. His work has won such awards as: the 2017 Coach of Honor Prize (Aprocorm), the 2012 RRHH Prize for the Best Blog (Tatum), and the 1999 Accésit CEF Management Prize (Centro de Estudios Financieros).

He is a frequent collaborator with numerous outlets, has written more than a hundred articles for the popular and specialized press, and is a patron of Helping by Doing, a foundation for responsible events that attempts to achieve business goals by supporting social projects.